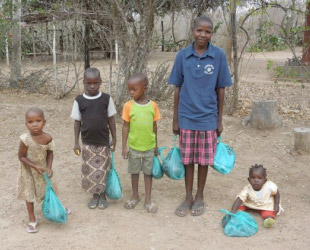 We really wish you could have been with us, and DelRay and Madeline Nichols, as we arrived in Nairobi, Kenya in late August. The temperature was nice, the weather dry, but the roads were dusty. Yet it was good to be back in the bush in Kitui District, where the Lord led us to over 20 years ago. The IPC Churches continue to faithfully serve the Lord, some now even having prayer meetings. And the Bethel Bible and Technical Schools were soon to begin classes. What a joy to see the Lord working in the hearts of many.

We had to shift into high-gear and get things cleaned up in the team house as well as our own place. There were a lot of critters and dust from months of not being used, but we knew the Eye Camp staff would be arriving the next evening to see the eye patients who would start coming on the following Monday. Five from The Lighthouse for Christ Eye Centre arrived safely after an eight-hour drive from Mombasa, and were ready the next morning to start work…and they did! 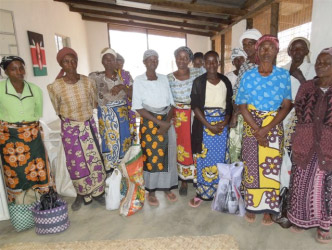 Daniel Mwinzi, one of our pastors, was there to start with a Gospel message before they began seeing patients. Over the five days they saw nearly 300 patients and performed 39 eye-surgeries. But the greatest blessing was that eleven of the patients accepted Christ as their Savior! You were praying and God blessed with sight to many and souls for the Kingdom.

That same Monday morning, the builders arrived and were ready to work on the Ndithini Church. Gary and DelRay went out to see the first row of bricks go onto a foundation which had been put in eighteen months ago. The congregation had provided their portion of the supplies and was ready to get the water for the cement and prepare meals as the builders worked. The Lord had provided for the cost of labor, cement and roofing, so all materials were on hand. In 23 working-days the walls were up and the roof on, including a small covered entrance! (see the picture on the page top) There are still no doors, windows, or cement floor, but they are meeting at the building and working on those additions. 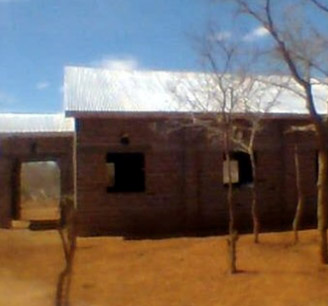 A foundation was also dug for another church where Joel Musee (who had jaw surgery in 2003) is pastor. Since we returned to the States, they have been able to complete the foundation. The church has been meeting for nearly four years, and is growing slowly.

Gary and DelRay visited nine of the ten churches, speaking in most, but were only able to visit and encourage in the rest. Madeline and Pat did two ladies conferences, with over 150 ladies attending in one meeting and over 50 in the second. Madeline gave out lots of beans to the children and some women (right). God provided through your gifts so that 630 church families could receive beans as well as corn. THANK YOU for being such a great help to God’s people there! The ladies also did some visitation in homes, which is an encouragement to them.

Please pray with us as we plan and prepare for another mission trip to Kenya in 2013. Pray for the right people to go, the team’s travel funds, funds to keep the watchman working and protecting the properties of the mission and Bible School, and for projects funds to build the walls and roof for Joel’s church.

May you and your families have a wonderful Christmas as we remember the humble birth of the One who came to save the world from sin, and may you have a Blessed New Year!

Yours in His service,