The Fundamentalist is the only hard copy newspaper dealing with current issues in the church such as prosperity theology, Pentecostalism, modern worship, Bible versions, etc. published in the whole of Brazil, as far as we know. We publish 3,000 copies of The Fundamentalist every three months. 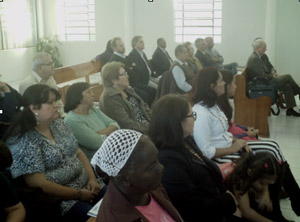 We had our fall meeting of CIEF on May 25 in the city of São Paulo. We had a good group and good messages on “Contending for the Faith.” Our director of the Northeast of Brazil made a surprise appearance at the meeting and announced that we would have the next meeting of CIEF in the spring up in the Northeast in Garanhuns, Pernambuco.

In April we took a seven hour trip to Rio de Janeiro to visit our friend, Josias, who is starting a new church there. He had been inviting us to go there for years. We also went to a three day Independent Baptist missionary conference where we made some good contacts. I set up a table, gave out our newspaper, and sold a few books at nominal prices.

The Olson family welcomed another grandchild, Nicholas, born in May to our daughter Priscilla and her husband Nick! That is in addition to our granddaughter Kaylee born to our son Matthew and his wife Carolyn in February. Thanks again for all of your support and prayers.