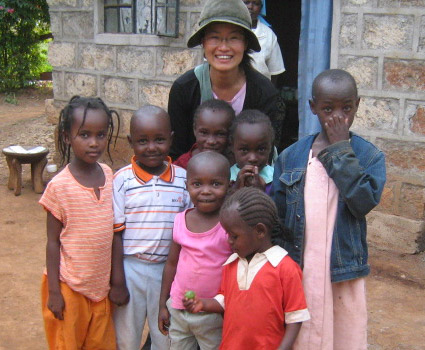 When I entered the library of the Bible College of East Africa for the first time, I was surprised because of the world map on the wall. The map was different from one that I had used. The map with which I had learned the location of nations, oceans, and continents had the Pacific Ocean in its middle, so Asian countries around the ocean like China, Japan and Korea were almost in the center of the world. Now the map that I saw in Nairobi, Kenya made the African continent in the middle of the world. Though it was the same world, it was drawn differently, depending on a standing point of designers or viewers. I had been used to viewing the world only from my standing (viewpoint), which I thought was the only way. In fact, with this new map, I could see how close Africa was to North America and South America, which I had hardly figured out with the previous map. What about our own lives? How many standing (view) points are possible? Then what is in the center of our lives?

I used to have a girl in the junior youth fellowship of the campus church. She is from a slum area nearby. Though she was good at her studies, her father couldn’t afford her education. He was a drunkard who had no consistent work. So when there was a love gift designated to junior youth, I shared my burden for the girl with my Sunday school teachers; they were supportive to my idea for her secondary school education. I calculated the budget for her schooling, and realized that boarding schools in Nairobi were too expensive. My preference was enrolling her, eventually to graduate without owing any school fees. We searched and found a secondary school near Nairobi with conditions that I wanted. I explained to her the reason why I preferred that school, and she agreed to join it. However, her attitude was not so cooperative; I assumed she wanted a school in Nairobi. Anyway, when I visited her in the school during mid-term break, I found her doing well and communicating better with others than before when she had been with her father. Eventually, she returned home for school vacation and gave us a report card with excellent grades. Everyone who was involved in helping her was happy. I never delayed going to the bank to pay her school fee for the following term. Yet, there was a certain anxiousness in my heart telling me this case went too easy.

Well, this girl didn’t turn up at the beginning of the next term. Call after call, she refused to communicate with us. She had many pretexts to delay going to school. Why? Was there any problem in the school? What should I do about the school fee already paid? I concluded that she didn’t want to go back to the school. But, she appeared one week after the school had opened. Then she said she wanted to go to school. Wow! Did she think the world should spin around her making things go as she wanted them? Surely it pained me. Then the following day she came with her mother, whom we had rarely heard about. By the way, they resembled each other so much that none could doubt their relationship. Their story was that when the parents got separated, the girl remained with her father, and her mother went far away to upcountry. Now the girl made a call to her mother, who traveled all the way to speak for her. She was desperate to go back to the school! Only after having the girl write a letter to promise not to repeat this behavior, did I hand over the school fee pay slip. The mother would present it to the school as she would accompany her daughter. Besides this, extra money was arranged for her basic needs during school days, and for transportation back to the school. I explained to the mother what the money was for the girl in a boarding school.

The following evening, I learned that they had reported back to school. However, a few days later I was once more informed that the girl was short of her basic needs. Whoops! Where had the money gone? The mother never picked up my phone calls! I felt like locking myself somewhere and crying loudly. If I were in their shoes, that is, too young to understand her life situation, or too poor to care for her own daughter, how would I view the situations? Would I make the same choice or another way? However, were their choices right? Helping the needy, I often see many with short-sighted choices just to meet their immediate needs or desires. There must be many reasons. And one could be their being so focused on MY needs, ME, MINE…which results in no room to look around to others in their lives.

3) His Words as Their Choices

In the first class with my students, I usually make them draw a world map. I tell them to locate Kenya or their respective countries, along with their home towns, on the map. Then, most of them draw a world map locating the African continent in its center; interestingly, there are a few drawing Africa with only Kenya or their countries in it as if there were no others but ME or WE in the world. While using this to know about my students, e.g. their educational background, from the maps I bring their attention to our tendency to view the world from our own standpoint (e.g. Koreans making Asia the Center, Kenyans making Africa the Center). Sadly, this kind of self-centered tendency is sometimes observed in handling the Bible (well, I hope I am not going too far). I mean people use Bible verses for their convenience or to justify their positions. I have seen some misusing Bible verses in their business, and even misquoting them out of context, even in churches. It shouldn’t be that way. The Bible should be viewed as God views it. His Word should be understood as God communicated it to us.

What about our lives? I see that life can be so tough in many ways; again many viewpoints and choices are possible (even choices I would never make) in different life situations. It is one’s choice that reflects the values and principles to which he or she holds. What then serves as the basis of our choices as Christians? Unless one puts his own views and thoughts aside and takes God’s words as taught in the Bible, regardless of the situation which he is in, isn’t it hard to be called a Christian? This would be not easy for the needy, especially in their urgent needs. I hope the girl mentioned above will finish her secondary education well. But more basically I wish her life to be as a Christian, someone with God’s Word and promises in the center of her life.

As for missionary services in this field, I am gaining practical knowledge to assist the needy; on the other hand, I am learning about the importance of spiritual guidance in their positive choices and precautions against their negative choices.

Thank you for your love and prayers for this mission field.