A Fine Missionary and a Keen Soul-Winner 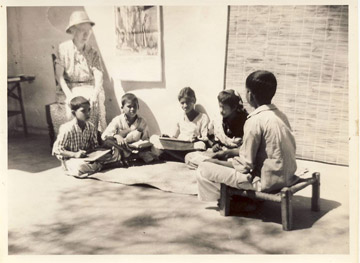 The title of this devotional constitutes the comments sent back in a communication to the Independent Board of Presbyterian Foreign Missions upon hearing the news that they had appointed Miss Louisa Lee as a missionary to India. In fact, she was the first missionary sent out under the auspices of that Independent Board on April 9, 1934.

To be sure, this was not her first experience of being a herald of the gospel in India. She had gone out under the Board of Foreign Missions of the Presbyterian Church, U.S.A. in 1913. Two years before that, she had graduated from the University of Washington at Seattle, with a bachelor of arts degree and a certificate in teaching. Other educational schools she had attended were Wooster College and Miami (of Ohio) University. Attendance at Union Mission Language School gave her a working knowledge of both Urdu and Hindi languages.

Why did she leave her denomination’s board of foreign Missions? In one word, the infallibility of the Scriptures. In 1934, an executive of the India Council, while acknowledging that her conviction of Scripture’s infallibility was what had originally been the belief of the board in years gone by, yet currently informed her that there was great doubt that the writers of the Scriptures were infallible in matters of history and science in the present age.

Louisa Lee, in complete disagreement with this missions executive, not only held to the true faith of biblical Christianity, but expressed her resolution that it was a necessary qualification for every Gospel preacher, teacher and missionary. Further, she would not be able to work alongside of anyone who denied the infallibility of Holy Scripture.

Leaving eventually after two decades under the Presbyterian U.S.A. board, she joined the Independent Board for Presbyterian Foreign Missions. She expressed her desire to the new board that she be allowed to remain in India, because as she put it, “my home is in India; my heart is there; and I love the people.”

God’s Spirit would grant her another fifty-nine years of faithful service to the masses in India before being taken home to be with her Lord and Savior in 1972. Part of that span of time was spent after a time of furlough in the United States, but found no one to take her place in India. So she returned to take up the mantle of communicating the good news of eternal life to all who would give her a hearing. She was indeed a fine missionary and a keen soul-winner.

Words to Live By: When was the last time you prayed for someone – a relative, a neighbor, a work associate, a school mate, a stranger you met this week – to be saved? Louisa Lee was a keen soul-winner. It all begins with prayer for lost sinners. Then, a soul winner prays that God will provide the opportunity to say a word of grace to the lost person. Last, you praise God for that opportunity, and pray that the Word of grace will bring forth fruit unto eternal life.

This article was written by David Myers and published at This Day in Presbyterian History.