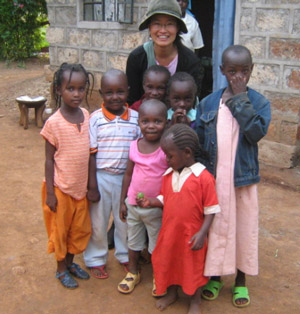 A few years back, I had the privilege of listening to a missionary to a third world country. He shared many of his missionary experiences. After listening to him, I could sense that he had struggled in helping the needy in the field. He described it as “too many.” In my mind I questioned, “A missionary hesitating to help people?” Years later, when I myself stepped on this mission field, then I could understand what that missionary had meant by “too many.”

1) My Struggles | It was the day when I went to a local market and had on clothes with big side pockets. Children were there hanging around, begging money from tourists. It was just a normal scene that I was used to until I felt the small hand of a child slip into my pocket. Fortunately there was nothing to lose in that pocket, but I lost something else. Since then, I could no longer treat the children with the same mercy that I had before.

In a market, when I asked the price for one meter of a certain cloth, the seller told me “100ksh.” I inquired the price for 2 meters of the same material; then the seller gave me the price “300ksh.” What kind of math was used for the price? Sadly this kind of mathematics is applied almost everywhere, as if my different skin color means “money” to them.

People knock at my door to borrow (?) money. They give many reasons to borrow: hospital fees, school fees, or even bus fare to go back home for vacation. Once money, or something else is handed over, it is rarely returned. To my surprise the next time they knock at my door with more expectation and confidence. Things which are not returned trouble me, but the attitude hurts me even more.

Those experiences must be quite common to those who have served in foreign lands. The experiences are restricting in my relating to people around me. I complain that they see me as a foreigner with money rather than a missionary with the Gospel. I ask myself how the Lord felt as he isolated Himself from the multitude crying for more miracles and bread and did not care who He really was.

2) My Regrets | In the past, I came to know about financial difficulty. However, I used to stick to my financial principle that I don’t borrow money from others because I trust in the Lord as my sufficient provider who knows my needs. In fact, this has helped me to discern moments when to stop and to when proceed as He guides. Therefore I tend to expect the same thing from others, especially from Bible College students. If they do not learn to trust the Lord in finances in their daily lives, then how can they lead others to trust the Lord? My students know that as I don’t borrow, I wouldn’t lend money to them. Well, one day someone knocked at my door. It was a student of mine. She said that she had a stomach problem and wanted to borrow money to see the doctor. I told her that I would not lend her money. She kept silent and went back to the dorm. A few days later, I met her in the compound. She was silent and polite as usual, but she looked sick and troubled. I had doubts whether I was right to insist on my principle concerning loaning money to others. I regretted it. Not only that time, but I also recall a number of things with regret. Most of the time however, my regrets are there because I yielded to choices which were not the best for me.

3) My Choices | After those struggles, I made up my mind about those who would come knocking at my door. I have now set apart a small portion of my income for this purpose. Although only a portion, yet I do it on a regular basis like tithing set apart every month. I know many servants of God, with gracious hearts, give big portions to the needy. Seriously, I am not that big of a size vessel yet. Anyway, with that portion, at least I do not have to refuse their request. Sometimes it enables me to offer help even before they come to “borrow.” I know that it will not necessarily be returned, so I can just let it go because it will be used to cover their urgent needs.
More importantly, there is a Bible verse which drew my attention: “And the hand of the Lord was with them: and a great number believed, and turned unto the Lord” Acts 11:21. I admit I have been busy serving in the field and eventually have not spent sufficient time for prayer. But the verse tells me that no matter how busy I may be, no matter how much I may give, all will be meaningless without the Lord. Souls are won to Christ not because of what I do, but because of the Lord’s work in their hearts. He uses His servants for His work of salvation as they are tuned to Him in prayer and His Word. His servants become true channels of blessing only with the hand of the Lord. This means I should set apart more time for prayer and His words.

Please pray that I will have wise management of my time for personal prayer and devotion and spiritual discernment in helping people around me.

In His Service,
Bai, Eun Young