Thank you for your prayers and concern for me to travel to Tanzania for the study of the Swahili language. I arrived safely and settled down well in the language school in the town of Morogoro.

Why the Swahili Language Study in Tanzania?

As I have been working with students of the Bible College of East Africa, I realized that the Swahili language served to build unity among the people of Kenya, who have more than 40 different tribes. People are fond of speaking the Swahili language among themselves even though the English language is official and they are fluent in it. The tendency to use the Swahili language is more among children, elderly, and people in the countryside. If a foreigner communicates in that language, people appreciate it, and one can easily build rapport with them. Therefore I wished to learn the language and I studied some.

However I was too busy with my ministry to make a proper study. In fact, one time I was about to join a language institution in Kenya, but there was a concern about safety in that institution. On the other hand, it was known that the Swahili schools in Tanzania use the grammar of the language while that of Kenya often ignores much of it. Finally, during this year of furlough, I could make a move to join a language school in Tanzania where some of my missionary friends have already studied. 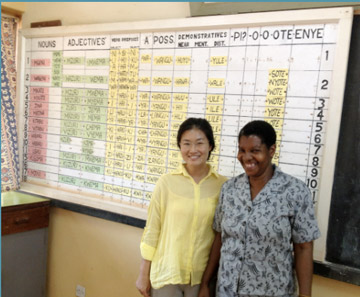 The Swahili language borrows its alphabet from the English, making writing, reading and pronunciation of the language quite easy. What makes the language unique are its nouns. It has about 15 different classes of nouns; prefixes and suffixes are the tools to differentiate verbs, adjectives, and relative participles according to each noun class. So it took almost half of the course only to learn and be familiar with the different noun classes, prefixes and suffixes. When I was yet in Kenya, I really struggled with the change according to noun class when I was speaking the language.

While I was learning the language, I came across the beauty of Swahili proverbs. For example, “palipo na moshi pana moto”is arranged simply, rhythmically and meaningfully to tell “where there is smoke there is fire.”

Also it was interesting to know that there is no Swahili word equivalent to “late” in the English language. So if one wants to say “I came late to the school”, one can not but use verbs only and say “nimechelewa kuja shuleni.” meaning “I delayed to come to school.”Again there is a Swahili word to mean “many” but no expression of “many nights”. So, if one wants to say “he stayed many nights there”, a sentence may be put like this, “amekaa siku nyingi usiku kule”meaning “he stayed many days night there.”Isn’t it interesting?

Since I am a foreigner and a student in an institution in Tanzania, I had to apply for a visa as a student. Well, while the website of the school lists US$550 for a student visa, I realized that the students from the previous course paid only US$200. So I wondered why the discrepancy?

In fact, the school administration was not satisfactory. They said that the school has a long history and a missionary used to take care of the school’s administration. After his retirement, the nationals took over the office; then the working style seemed to change. For example, my school fee for the language course was paid through a bank. So on the first day when the class started, I went to the office to give the bank transaction number to them for the wire transfer. Days passed, weeks passed, but there was no news about my school fee receipt. Then, after almost two months since classes began, I was called privately to the office to be questioned whether the school fee had been paid at all. It hurt me much. Although I finally received the receipt, I could no longer trust anyone in the office.

In such a situation, I had to hand over my passport to the office for the application for my student visa. They said it would take a week to get a student visa. However a week, then two weeks passed, and there was no news about my visa. It was not only I, but other students who applied for a visa that had the same problem. It was the immigration which delayed them. Probably they wanted “something additional” from the applicants. In the language school, an office staff member took care of visas for students. Each time he goes to collect a visa, the immigration officer tells him to “come tomorrow”. I heard he had to go there almost every day for more than a month. It made me think.

Surely I was upset with the school administration, but I saw how that staff member struggled to handle visas, including mine. I hesitated a few days, but eventually I made up my mind. One day after my class, I purposely waited for the staff member. When he finished his work in his office, I came to him to say “THANK YOU” for his help for the visa. I saw a smile on his face. When I left his office, I felt somewhat relieved in my heart. Surprisingly, the following day he came to me with a visa fee slip issued by immigration. A week later he came back with my passport along with a student visa. After all that, it took more than 50 days to get a three-month student visa.

Well…who knows? It could have been delayed more if there had not been gratitude!
Thank you for your prayers and please pray for my physical strength during my stay in Tanzania. Because of malaria and typhoid, I had a difficult time the last two weeks.