Partners With The Rickers In Guatemala 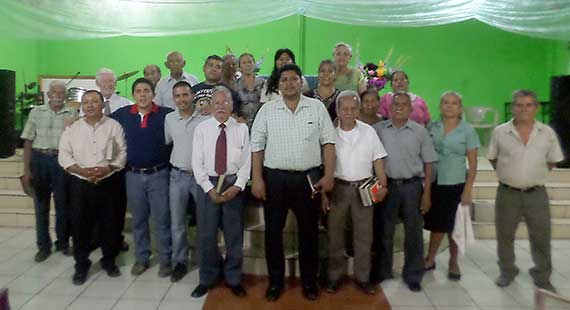 “Stand fast in one spirit, with one mind striving together for the faith of the gospel” Phil. 1:27b

Warmest Greetings to you, our Faithful Intercessors,

Watch, therefore: for ye know not when the Master of the house cometh, at even, or at midnight, or at the cockcrowing, or in the morning: lest coming, he find you sleeping. And what I say unto you, I say unto all. WATCH! We’re sure that you feel like us. The Lord’s coming is so near—perhaps a breath away! We must work while it is day, for the night is coming when no man can work! Let us be faithful in sowing the seed and let us be faithful unto death. Let us stand up and be counted. Let us defend the faith. How wonderful it would be to see Pastors, laymen, Christian workers all in agreement striving together and being wholly faithful to the Lord to further spread the Gospel. Wouldn’t we have a beautiful army set for battle with Satan? The time is short. Let us lay aside all weight, and sin which does easily beset us, looking unto Jesus, the author and finisher of our faith!

Praise the Lord for the 600 copies that our tract printer made up for us with no charge. Thank the Lord. Another 227 copies were printed at our Bible Society. Another approximately 250 e-mail copies were sent out too. It was time consuming to deliver them to the Churches and bookstores and Pastors, but we want to make a difference by telling the truth of what’s happening in the ecclesiastical world, particularly the danger of the World Evangelical Alliance in deceiving the evangelicals by their ecumenical leaders taking them back to Rome and the Pope. Pray that God will use these bulletins to open the minds and hearts of true believers, and to know what is going on in Church affairs around the world. Many Christians have fallen for the false propaganda of organizations like the Roman Catholic Church, the World Council of Churches and the World Evangelical Alliance.

Daughter of Fundamental Pastor in Mazatenango Called to Glory

We asked in our praise and prayer letter that you pray for the Pastor’s daughter that had cancer. She was a popular high school teacher and battled against cancer for two and half years, and the Lord called her to glory. Stephen, Juanita, Samuel, Joshua, Hal and Evelyn all drove out to the funeral in Mazatenango, 3 hours away. She left four children of teen age and early twenties. Hal was invited to give the grave side message. Pastor Virgilio asked Hal to pray for the four sons and daughters after the end of funeral service. The casket was carried in the streets to the local high school where a thousand students were waiting for a service there. Hal was asked to pray and Noemi’s teacher friend gave special words. About 100-150 students made it to the grave site. While walking all the way, the Lord was speaking to me (Hal) about preaching the Gospel to these unsaved students. Pastor Virgilio led in the singing of hymns and choruses. A Christian brother from the church read the Scriptures on the resurrection. I spoke on the two resurrections; one that the beloved school teacher would take part in, because she believed the Gospel and received Jesus Christ as her personal Savior. The second resurrection would be for the unsaved people who knew not the Lord Jesus and didn’t receive him as their Savior. They would be raised up also to be judged by the Lord and sent to hell. The grave site was surrounded by about 150 people that heard the good news that Jesus could save from the second resurrection and hell.

Hal and Stephen with many pastors, church representatives and their wives took our church bus for the four hour trip to the town of Las Trozas on the edge of the Pacific Ocean where they produce cooking sea salt. The Council has a membership of eleven churches and pastors, which at one time were members of the ICCC and ALADIC. In the early years they sent delegates to Geneva, Switzerland, Cape Canaveral, and Recife, Brazil. This Council is now made up of a new generation of leaders. Hal and Stephen presented the CIEF-Guatemala, ALADIC and ICCC. They explained the new membership procedures to join CIEF-Guatemala and then proceed to membership of ALADIC and ICCC. This group of churches is conservative and true in Cardinal doctrine. Hal asked if they are ready to defend the faith against the apostasy and unbelief of the day. They replied a hardy “yes.” They were invited to join as a Council or individually. The Council, as a whole, voted unanimously to join CIEF-Guatemala and will proceed by application to be members of ALADIC and ICCC. Pray for this group of churches, that their pastors and leaders will stand firm and be faithful to the Word of God.

August is the Month of the Bible in Guatemala

The Bible is so precious and vital in the salvation of the unbeliever, and so important in the life of the born-again Christian. Faith comes by hearing, and hearing by the Word of God. The Trinitarian Bible Society of Guatemala had special offers for various Bibles; some were two for one which was the large print Bible, and others were large print leather Bibles with concordance. These had 20% discount. We also offered small pocket Bibles, buy one, take two. We encouraged people to try our Evangelistic Bible that was printed in Guatemala, and offered at almost cost. Some of you folks gave offerings and donations towards this project, and because of that we could reduce the price and at present they are sold now way below cost! Praise the Lord!

Our Trinitarian Bible Society published 12,000 tracts, of two different kinds, and we are selling them at a low price, and there are 150,000 tracts that are free. Our two churches, along with the pastors and churches of CIEF, use them to evangelize. Many people coming to the Trinitarian Bible Society Bookstore for Bibles and literature and those that are interested in evangelizing are given them also. As we said before…..sow the seed while it is day!

This annual conference was held in our Montserrat Church. It took much planning and we invited two speakers to preach on the same theme, one in the morning and the other in the afternoon. The theme was “Proclaiming the Gospel and Defending the Gospel of the Lord Jesus Christ.” The first Preacher exhorted us to obey the Bible and evangelize, and emphasized how we must be prepared to defend the Gospel. He said that there are Churches that do not preach the Gospel and he gave examples. The afternoon Preacher spoke on Jude 1:3, exhorting the people to not forget the exhortation to contend earnestly for the Faith that was once given to the saints. We had wonderful sound Gospel hymns and music from a small Choir and the Ladies Society sang and our brother from the Montserrat Church gave special music. The Ladies Society served a Guatemalan specialty meal which all enjoyed! They went home contented with spiritual and physical food. And as always, we had our Bible and literature display at the back of the Church.

Publications by the Trinitarian Bible Society of Guatemala

Pray that the Christian Bookstore of Guatemala would be pleased to offer them to those who would take time to read. We will name a few for you to pray that they will be received by the Christians.

Thank you for your prayers and support. The Lord bless you.

Your Fellow Laborers in Christ,

P.S. from the Executive Director: From my desk brethren, I needed to explain that that the monthly shortage in the Ricker’s support is partially due to the increase in healthcare costs for the couple. Similar to what everyone else is experiencing, we felt it best to present it as a matter of prayerful consideration. Thank you for your faithful gifts, and prayerfully weighing what can be done additionally.