“Finally, brethren, pray for us, that the word of the Lord may have free course, and be glorified, even as it is with you: And that we may be delivered from unreasonable and wicked men: for all men have not faith. But the Lord is faithful, who shall stablish you, and keep you from evil. . . . And the Lord direct your hearts into the love of God, and into the patient waiting for Christ.” –2 Thessalonians 3:1-5 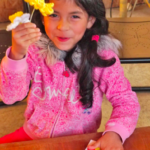 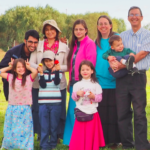 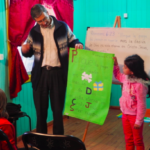 We praise the Lord that participation in our Bible school meetings has been stronger since Vacation Bible School in February. We began the week after VBS and have continued meeting every Wednesday for a short lesson and game time, and continue with Bible school on Lord’s Day afternoons, during which we all sing and have Bible classes. Geneva teaches the children on the Lord’s Day while I (Paul) teach the young people and adult class. Anna normally puts together an activity for the children which goes along with their lesson each Sabbath.

Prior to VBS we were sad to learn that Madeline’s grandmother was moving, so she would not be around on weekends as before. Then after VBS, we were especially sad to see Roccio and Mattie move away to Chillán with their family. Their grandmother continues to live on our street, so we did get to see them once recently.

However, a whole new group of children(for the most part) have begun to attend, including three sisters who moved into the neighborhood during March. Please pray for these children: Solange, Consuelo, Conni, Noella, Kiara, Gabriela, Pascal, Nicolás, Bastian, Sergio, Hector, Benjamín, Joaquín, and Cristóbal.

We were also able to distribute a good number of helpful Christian Books at the two conferences in which we participated in Santiago.

On a few occasions Paul and Julio have spent some time on Saturday afternoons distributing tracts and conversing with people lolling about the central plaza in Santa Clara. On one of these occasions in March we talked with Francisco and his familyand invited them to visit with us in our home the next Saturday. After a couple visits, he stopped by and indicated an interest in receiving help regarding the doctrine of hell so that he would be better prepared to defend it in conversation with others, and we have recently had two good studies on the topic thus far. We also agreed to continue meeting for a Bible study once a week as possible. Please pray for this family, our weekly studies together, and our relationship with them.

In early March Cheryl and I, with three of our children, made the trek to Santiago to speak at a large homeschool conference especially designed to encourage and assist Christian families. Cheryl and I spoke once each day (two days) to a lot of people on the subject of educating multiple children and administrating our home under the Lordship of Christ and the guidance of His Word. This went very well and we met a lot of new folks. We also distributed many good books through a book table.

At this conference we met two young couples from other parts of Chile who indicated an interest in coming down to see us sometime in Santa Clara. One of these families, Ricardo, Paulina, and Felipe(pictured on the next page with some of us), stayed with us March 31st through April 3rd while Julio and Johanna were.

During the last few months we also became acquainted with a friend of Rosita’s named Matilde. After a couple of visits with Matilde she suffered a fracture of one of her arms from a dog bite and was hospitalized. We have been able to present the Gospel to her several times as we have visited with her during her recuperation and have also met her friend Uberlinda. Please pray for them.

April 11-15 Cheryl and I traveled to Santiago a second time, this time with Katie, Faith and Rosita, since Paul had been invited to present a message on The Family and Educationat the Annual Congress of the Independent Methodist Church. We enjoyed a blessed time of fellowship with our Methodist brethren and Paul’s message appeared to receive a good response. On Saturday, Rosita also visited the congress with us.

On Wednesday the 12th, we met with a group of home educators to answer their questions. This also went very well and almost all the literature we had brought on this trip was snatched up rather quickly. I missed a good opportunity, however, when asked how we involve and train our children for carrying out the Great Commission. I explained the advantage we have being missionaries and how they help out, but I forgot to mention that they were that very same day carrying on the Wednesday meeting at our Resource Center entirely on their own, which was a first for us all.

Thank you for your prayers and support as we labor in the Lord’s vineyard.

In the Riches of our Lord’s Grace in Christ,

Paul and Cheryl and family